Mobile: +47 402 28 995
Rolf Nykmark graduated from the The Norwegian State Academy with prof. Terje Kvam, Tor Skauge, Arnulv Hegstad and Per Dreier, as his teachers in conducting, choir and orchestra. He has worked with conductors such as Per Dreier(1929-1997), conductor of numerous orchestras all over Europe, such as The Royal Philharmonic Orchestra in London and London Symphony Orchestra, Militiades Caridis (1923-1998) and Massimo Lambertini (assistant conductor to Riccardo Muti at the Ravenna Festival).
Nykmark has a huge repertoire as conductor, and it consists of Opera, Operetta, Church music and musicals for chorus/ soloists and orchestra. 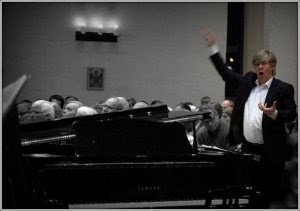